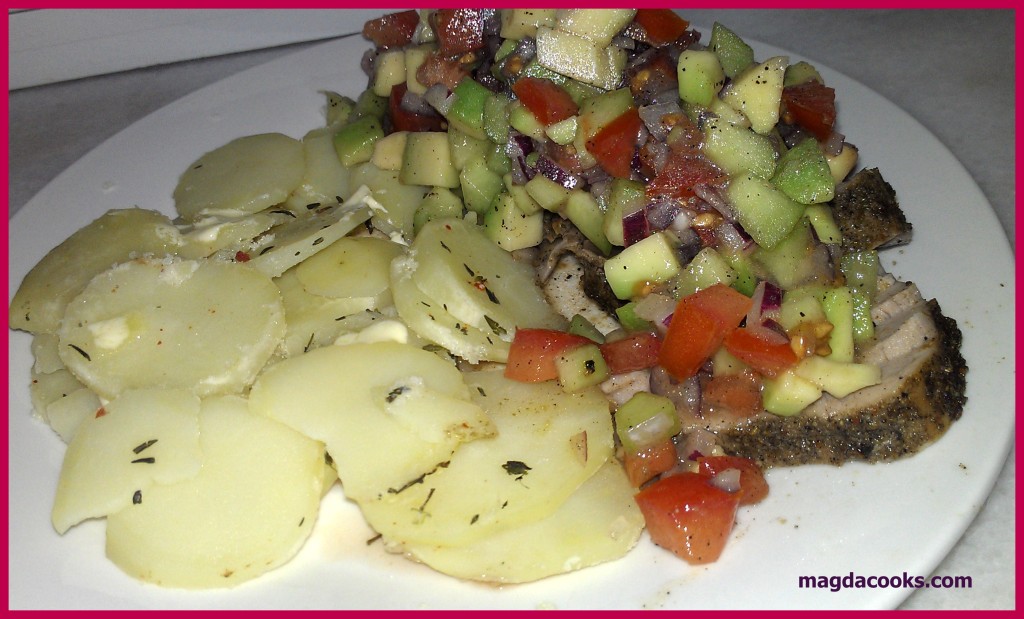 As the year 2013 ended Cookies was looking at all the stats on Magda Cooks and figured out that this is my 100th post – I honestly didn't know I hit that much, but as it is, lets now go for 200!

As I mentioned many times before in the Burrow we eat a lot of vegetables and there is no meal without some. It may be cooked carrots or just simple salad or even just both. Though lately I have an incredible problem with eating certain veggies which makes me unhappy. And also it is hard to understand as well, cos older I’m I like more and more kinds of foods. I think the only one will be forever excluded is canned peas… Damn I hate it 0_o. I even can eat cooked spinach in little tortellini but definitely no peas. So honestly there is not too many veggies I've ate in last few weeks and it doesn’t help with the variety of new meals I can make.

But, as always I found something 😀 and it’s so simple yet so spectacular in flavour that I decided I will be experimenting with this idea a lot.

I still can’t imagine that I didn't think about it earlier, especially since Cookies is preparing a lot of meals straight from mexican cuisine. Probably because he is considered Master of Tortilla and Taco and we usually don't step into each others zones of expertise. I was looking for new way to prepare pork tenderloin and that it didn't include grilling 0_o. Soon though I wont be able to grill a thing 0_o cos Cookies will be moaning like: WHAAAT? Grilled …. AGAIN??? PHHHLEEEAAASSSSEEEE! So as I was searching I found this one promising idea for a  very easy 0_o mexican spice marinade for pork and along side I found a recipe for simple fresh salsa.

When I asked Cookies why he never made salsa before, he said… “I simply didn't think about it”, well, thats kind of hard to believe because he OVER THINKS everything. Anyway…during the last couple weeks I utilized this idea twice, each time with a different piece of pork: tenderloin and neck, both according to you know WHO, found them to be awesome. The rub is easy and requires only 10-15 minutes rest before cooking. Both meats I prepared different way. I baked the tenderloin and grilled neck chops.

In a small bowl combine all the spices, pour some oil, enough to make a moist paste and rub your meat from all sites. Tenderloin wrap with aluminum foil, set aside for 15 min then bake in 190C for at least 45 minutes. Uncover the meat for last 10 minutes. In the end, let the meat rest for 10min then cut slices and serve.

Neck chops rub with marinade and set aside for 10-15min then grill nicely brown on both sides.

For salsa... there is nothing easier. Dice all the ingredients, put into a bowl and mix good, pouring juice. Taste to find out how much salt do you need and pepper. You can also use chili or jalapeno but this version is universal and tastes so incredibly fresh.

Put salsa on hot meat meat and enjoy this simple, yet spectacular combination of flavours.

Take care of yourself and each other 0_o

PS. Cookies thoughts: HOMERUN, (can't use the term Grand Slam since Dennys uses it, don't want to engage into litigation now do we… since this food that Magda Cooks is much healthier for you…) And of course, Magda Cooks… it just right!