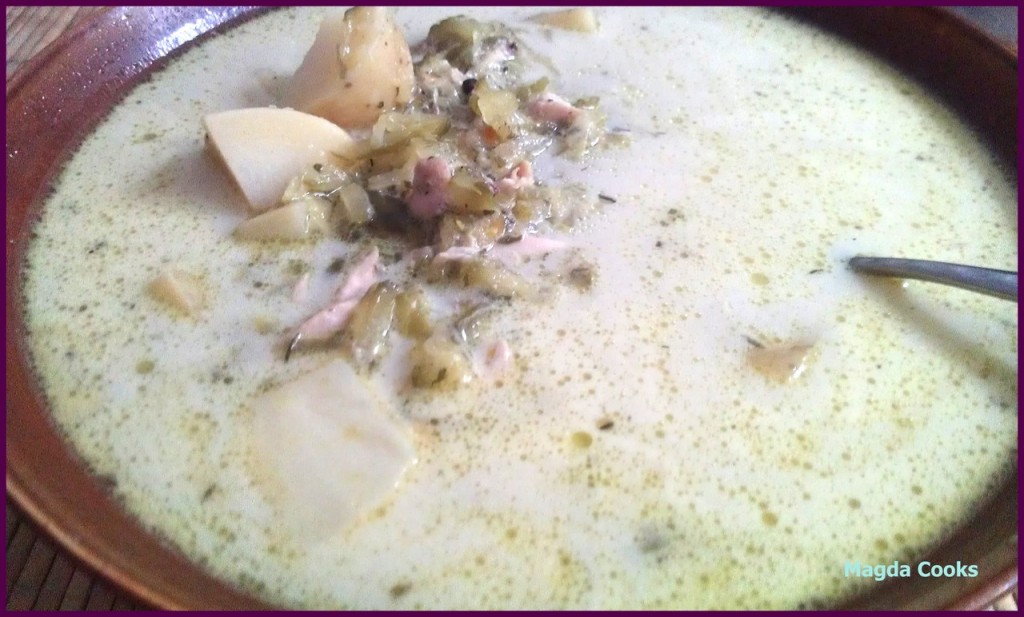 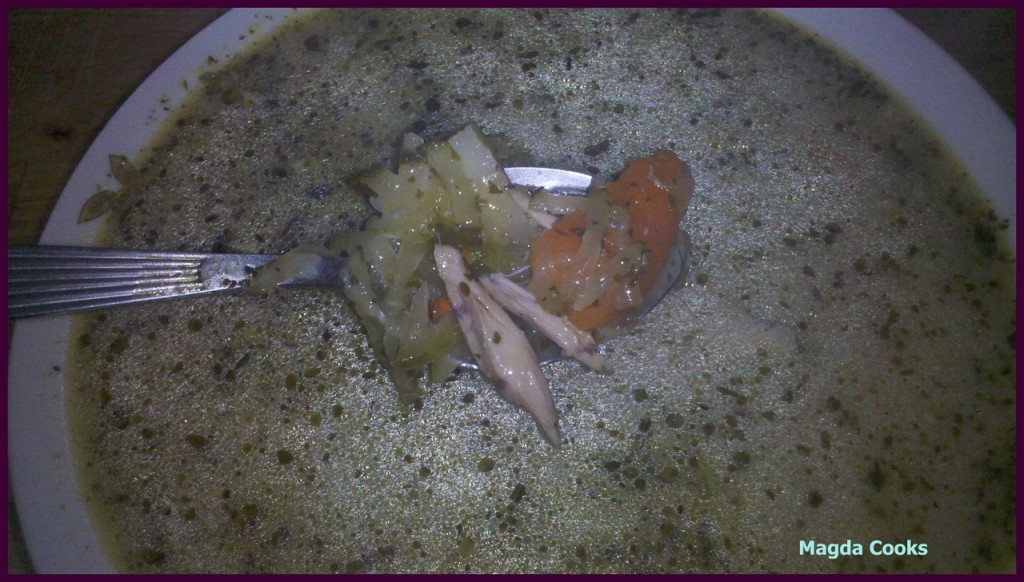 On occasion we collaborate on a meal. Depends on various factors, like time, and day, but, its usually SOUPS or something that requires a LOT of time. Your cooking goddess @RealMagdaCooks does not like to spend much time in the kitchen. She is NOT a good wife. HAHAHA, hell, all of the attacks on me, and you didn’t expect something back? 🙂 All joking aside, she is a good one, a keeper, well, OK maybe not… BUT I digress. Here is something I am sure a lot of you, unfamiliar with this type of meal, will be taken aback by it… trust me, it was my FIRST, SECOND, FIFTIETH reaction too… then all of sudden BOOM, I come around. No I didn’t say COME OUT, I said, around. Basically I remember a discussion I had with a friend of mine on GTalk or through GMAIL about a year after I lived regularly here in Poland. It was the typical fare, what do you like, how is the food, are the girls pretty, etc. I dropped a bomb on him and told him about Ogorki Kiszone in Polish and what the others in English would call Pickled Cucumbers Soup. He was like WHAT? You eat CUCUMBERS? in SOUP? Yuck. I said, NO, I don’t (I wouldn’t touch this at the time), but I said, these cucumbers tend to smell bad, and are just BLAH. But as you will see, I took the leap of faith… or I was ungodly hungry!?

Now if you say this to the typical Polish person, they will debate with you at the level of a Presidential election debate about the cucumbers and the health benefits (none of that I can find) and the Pyszna (delicious) taste and flavor. It wasn’t really until about 3 yrs ago, that I broke down and tried it. When Magda wanted to make it, she would make it for herself, and I’d actually make something ELSE for me… I bet she was offended, but, anyway… I finally tried them… in the soup… now I want to preface this with this fact. I think that my style of creating the soup base or BOUILLON had a lot to do with my ACCEPTANCE of this as something I now, admittedly, look forward to eating! About the bouillon, generally I make the bases, and Magda finishes it. Now for this recipe it will be a first here on Magda Cooks, I will start it, and Magda will finish it! Lets do this!

Please Note: I love thick soup bases and one with a lot Veggies in it, Magda likes the thickness BUT NOT the cooked Veggies, therefore, you can USE them AFTER the bouillon is DONE or NOT, that is YOUR choice. I prefer it with, and I think I wouldn’t be too crazy about it WITHOUT THEM. Just my opinion, and of course you can alter it to your tastes and preferences.

Ingredients: (For the Soup Base, the Rest of the Ingredients for the Recipe is Below)
15 Fresh Chicken Wings
3 Large Carrots
2 Medium Parsley Roots
1 Medium Celery Root (cut in half)
1 Large Onion
6 Beef AND Poultry (together) Bouillon Cubes
3 Tablespoons of Soy Sauce (Less Salt)
Unground Black Pepper
Thyme, and Rosemary

You should wash the wings, and pull out any feathers… in a big soup pot, toss in the wings, unground black pepper (about 6), and then add an amount of thyme and rosemary spices that you are comfortable with, the soy sauce, and the 6 bouillon cubes. About the cubes, they are listed for 500ml of water EACH, so in general I use about 4 liters of water per soup as during the cooking process it will evaporate some of that. Turn on the gas to medium, cover and start the cooking process. While this is ongoing, get your Veggies (either those listed above, or your OWN selections) and prepare them for the inclusion into the soup base.

Basically I peel the carrots, parsley roots, and celery root. I then, cut the carrots and parsley roots in HALF, (depending on size you could ALSO cut them into 4 equal parts!), and then with the celery root, I usually cut the HALF of the ball, into 2 equal pieces. I also cut the covering of the onion OFF, but keep IT intact. About 15 minutes after the wings started, I toss the Veggies into the Wings / Seasoning mix, reduce the heat if it seems too high, and cook for another 45 minutes or until the Wings start to look like they will peel from the bone, and cover.

After the time has passed, I take the Wings out, and TURN the heat off. The Veggies consistency may be a bit soft for some tastes. You can pull them out, (if you do not want them in the soup, or due to the consistency), or leave them in. I DO take the Onion out and then while holding it above the soup, I proceed to smash it up, to make the juices go into the soup base. I do not return the Onion to the base, and in fact, toss it away. Others use Leak instead of Onion, and you can also try to make the juices seep out and toss it. As the wings cool down, (not cold, they are considerably HARDER to peel), I begin to peel the chicken from them. I take off all of the skin, extra fat, and bones. Generally I prepare 3 bowls. One for discards, one for the joints and small bits and pieces for dog (for our animal loving readers, HE DOES NOT eat the skin, fat, OR bones, only the good stuff, like joint ends or chicken itself), and the other with the actual chicken in it. About 30 minutes pass, and I have what remains of the chicken. If the wings are of decent size you will have a very meaty bowl of soup, which this recipe should produce about 5 big soup bowls of. In other words, for a family of 4, a one day MEAL, and for 2, 2 days and lunch the next day.

I toss the peeled chicken into the soup base, and cover it, for when Magda gets to it… and at this point, its…

To finish the soup I need:

Preparations:
Peel potatoes and cut it into 2cm cubes. Taste Cookies Bouillon base to check how salty it is. Heat the boillon while you shred pickles on the biggest edges, don’t worry about all of the liquid it produces. It makes soup even tastier – it would be awesome if while buying pickles you could ask for additional juice… yummy! Put potatoes in the bouillon and cook for 15 minutes, then add shredded pickles and keep boiling for few more minutes. In the meantime add spices: pinch of basil and coriander and powdered garlic, generous amount of black pepper and last but not least humongous amount of lovage. I don’t think any of my soups can go without it. It creates this specific flavour I love. Cook for another 5-10 minutes. Add sour cream to the bowl, add flour and mix good, you should get thick but liquid mixture. Pour 2-3 ladles of very hot soup and stir vigorously to make sure there is no clumps. Pour whole mixture to the soup and stir. Let it cook 5-10 minutes on low heat. Check saltiness and if needed add some yellow poison or salt.

Until next time, take care of yourself and each other 0_o.

PS. Cookies already “spread” his Venom above, therefore there is no need to hear from HIM again. 😉