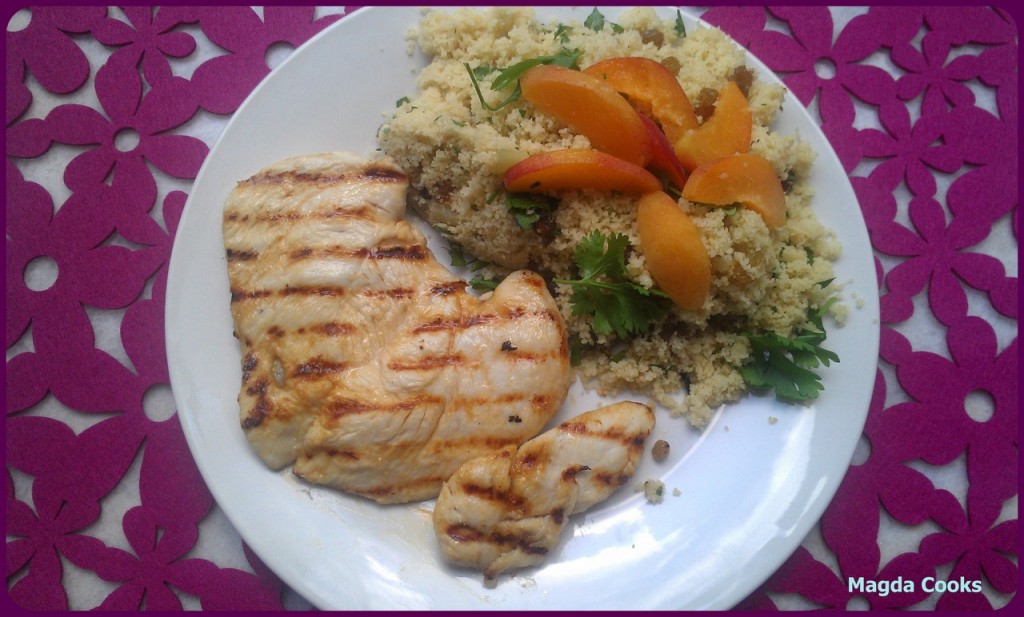 Since I’m trying to diet constantly, I tend to look for recipes that at least seem to be diet, (read that: HEALTHY) then I change everything that isn’t diet, and make it diet 0_o. This time I found on the BBC Foods site a really nice, and healthy dinner idea for grilled chicken with couscous.

I know it starts to be boring – all that grilled chicken 0_o, like I would hear Cookies moaning :D. But really, there isn’t many kinds of meat that are really low calories and mostly protein. I usually use chicken or pork tenderloin. Pork tenderloin contains the same amount of fat as chicken breast.  And grilling is one of the best ways to keep meat diet too.

So, another chicken dinner ;-), as always easy and fast. Those that make couscous from time to time, knows it takes 5 minutes to prepare it, not counting boiling water or bouillon. Salad another 10 but it can be done while grilling the chicken. The only catch is that you have to marinate the chicken, though not long, only around 15-20min.

Preparations:
Start with the chicken, butterfly the breasts by cutting through the thickest part of the breast, stopping 1 cm before the edge, then opening out like you see on the picture above. Mix all the ingredients for the marinade, place breasts in the plastic container, and pour liquid on. Make sure that chicken is nicely covered in the marinade, and cover the container. Set it aside for at least 15 min (fridge the best).

Now bring the water to boil for bouillon (can also be done from the cube). Make sure bouillon is strong – the same flavour you would like your couscous to have – if the flavour is too weak, the couscous will be bland. So don’t hesitate to spice it up extra (with soy sauce for example and black pepper). Mix sultanas with the couscous in the bowl, then pour hot stock and cover – set aside.

Now take the breasts out of the marinade, sprinkle with a little salt and place it on the very hot grill. Grill until cooked through. While chicken is grilling and couscous is sucking bouillon prepare a salad of your choice – anything you feel like and is made from fresh veggies.

Very light dinner with nice lemony flavour to the chicken.

P.S. Cookies, well he didn’t bitch whatsoever so I believe it was success 0_o.